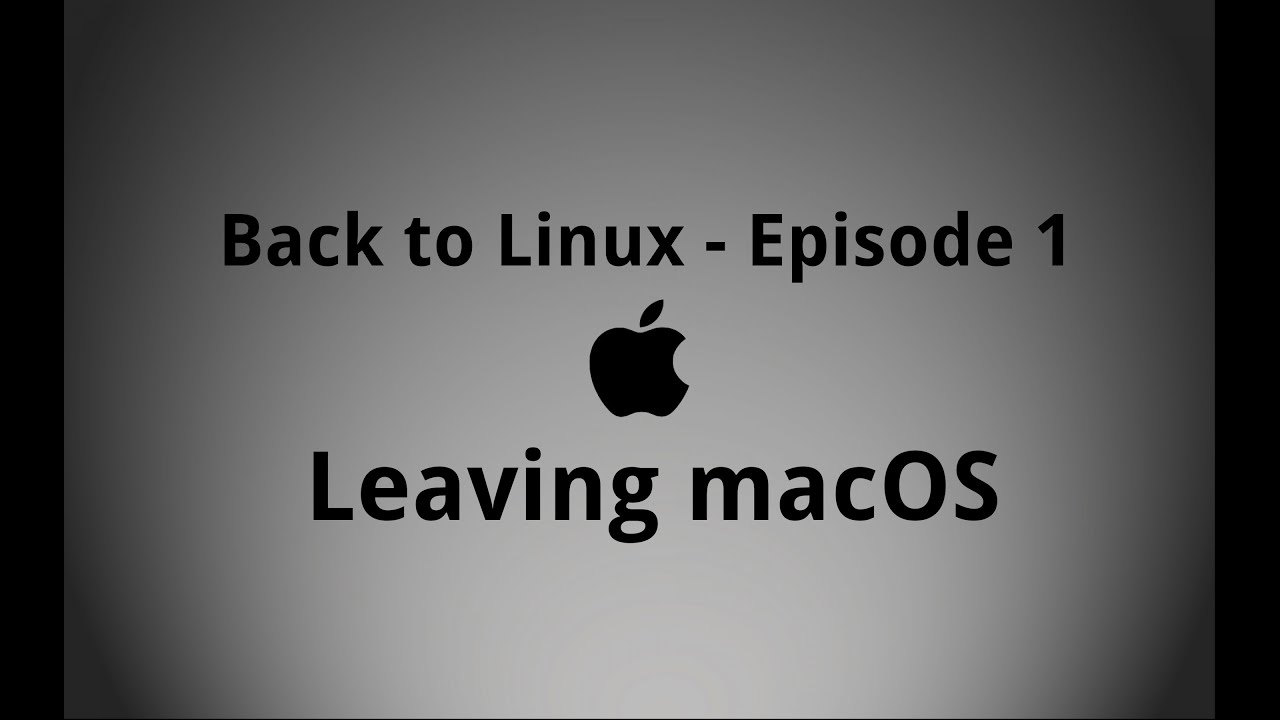 So this video is the first one from my series Back to Linux where I plan to cover my transition in a few videos, one part at a time. The videos will contain details about my computing experience so far, the reason for my move, a relatively short review of my next daily-driver, and the steps I took for the transition.

Like most of us do, I was introduced to computers and Windows at the same time. That led to the most obvious thing that could happen: I believed Windows and computers to be one and the same thing. However, after using Windows for over 14 years, I switched Windows to Linux as my primary OS in mid-2013 on my 2010 Dell Studio 1558, my first laptop computer. I had a dual-boot setup with Windows installed on a tiny partition at the far end of my hard-drive to make sure I'm still able to run video games. This was an obvious choice for me as being able to play games was one of the few things that kept me from switching to Linux. When my first machine died, I replaced it with an entry-level Lenovo and followed pretty much the same setup there as well. During the next few years, I distro-hopped through several noobs-oriented Linux distributions across a few flavors and built a decent dotfiles repo.

In late 2016, on my quest to find a better machine and escape the tens of frustrating Linux compatibility issues on my Lenovo, I looked for a new machine and evaluated a few hardware options like the newly introduced Razer Blade back then, the Dell XPS 13 (and 15), and others that I don't remember after all these years. The price of most of the machines I was considering was around 2000 USD (which was more than twice as compared to the most I had ever spent on a computer), and a lot of convincing from my brother who had just recently switched to a MacBook himself, I ended up buying a late 2016 Apple MacBook Pro 13 (without touchbar). It was the same year they introduced touchbars on McBookPro's but I opted for the only model that didn't have one, for obvious cost saving. And that's how I stepped into the third major operating system in a totally unplanned way.

My years with the MacBook

Given my hatred towards Apple and my history of Microsoft fanboyship, using a Macintosh as my daily driver was pretty unexpected, to say the least. Who'd know that better than my close friends who've had several debates about how Windows is the best OS and Microsoft is the best computer company on the planet?

Getting that out of the way, using a MacBook for the last four years was indeed a great learning experience. For the first few days, I wrote a lot of code to be able to accommodate macOS configuration into my dotfiles. I used macOS almost the way I used Linux: mostly through the command-line and tried to keep myself as less dependent on the Apple ecosystem as I could. Somehow I knew that even though I got lucky enough to switch to a Mac this time, my next machine might most probably not share the same logo.

As my setup evolved and my dotfiles grew, I always carried at least one virtual machine running Fedora with me to make sure my scripts were still compatible with Linux as I moved forward and that I was still in touch with Linux, at least to a certain extent.

Back to the present

Fast-forward to late 2019, I came across Linux for Everyone by Jason Evangelho and it quickly got me hooked, re-igniting my interest and passion for Linux once again. I invested in a pre-owned Dell Precision T3600 desktop from eBay and started preparing my way back to Linux, for whenever that day might be. The learning that had once slowed down had now re-accelerated.

I got to know System76 a little better, got infatuated with Pop!_OS, and almost lost my mind when I first experienced Proton through Steam on my Linux for the first time: I could play most of the Windows games on my Linux desktop, including the ones that I couldn't play on my MacBook.

Due to this sudden peak in my interest in Linux, my dotfiles received a total overhaul, I rediscovered Linux by learning several new concepts I had never explored before and I came up with twiner where I gathered a few (hopefully) useful scripts for the three most popular Linux flavors: Debian, RedHat, and Arch. I learned about the existence of cross-distro package management solutions like AppImage, Snaps, and Flatpaks and then out of fascination, I wrote foraget in Rust as a universal package manager wrapper so that one didn't have to remember commands for each of those package managers. As a bonus, I designed it to be able to work for macOS as well, sort of.

I switched from Fedora to Arch as my primary Linux distro, re-configured my i3 setup from scratch, and systematically revisited every single software choice I made in my setup to create an arrangement parallel to the one I had on macOS.

A few months back, Lenovo announced official support for Linux and then I think we all know how the story went from there.

My return to Linux

Moving between macOS and Linux means much more than just the OS. It also changes the host hardware, unless you're OK trying to run Linux on a Mac and vice-versa, which I know people have done, but let's talk about the general case here: you have to lose the device.

Looking back at the last four years, the macOS brought so many good things to my workflow:

And then comes the new hardware...

It is undeniable how well-designed things were on the Macintosh platform: be it the perfect integration between the hardware and the software that just feels like a single unit or the hardware design that appears to be "exactly the way it should be".

My 2020 Lenovo ThinkPad X1 Extreme (Gen 3) improves the things I want to be improved:

Now, this isn't my first ThinkPad. I've been using one at work for over three years now and to sound very kind, I'd say I just hate it. It's a T480 with a high-capacity battery and though it's a 14-inch laptop, which is my most favorite size for a portable computer, it's way different than my X1 Extreme. Too much chassis flex, cheap plastic exterior, noisy fan are only a few things that make it so bad for me. I've used Dell Lattitudes that cost much lesser than this one and were still my favorite back at my previous job.

My fears from the switch: GONE

After using a device as well-designed as the MacBook Pro, I knew I'd certainly lose a few things for sure. However...

There are a few other major changes though:

So, was it a good decision to leave the Apple ecosystem and "downgrade" to a ThinkPad? I don't know. But what I do know, it'll be full of adventures for sure. Besides, I've decided to not remove compatibility for macOS from my dotfiles, who knows what the future has in store for me. Also, I'll have a small unused Windows partition at the far end of the drive, just like the old times, in the end, I had to pay for the license, so why not keep it?

So that's all that I have for this video, there's a lot more to come in the next videos where I'll review the machine and talk cover much more details about my setup. Unsurprisingly, it was full of adventure, and that's all I can say without giving away too many spoilers. So till then, may the maker watch over you, see you in the next video!