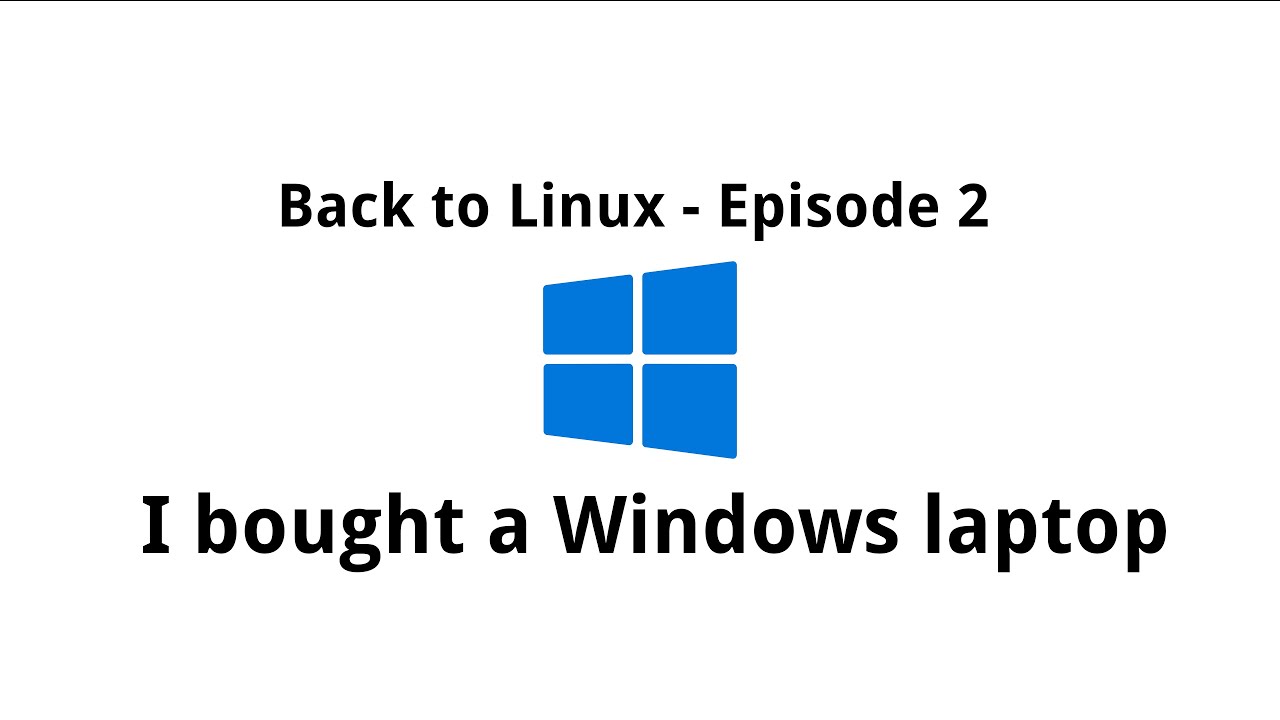 This video is a part of my series Back to Linux and is a continuation of my previous video where I talked about why (and what) I made the transition to. If you haven't watched that video yet, I highly recommend starting from there to get the context of this video, but if you have, let's get right into it.

So before I start this video, I'd like to get this off my chest that I didn't plan to pay for Windows on my new device. Now for some reason, even though Lenovo has been announcing official Linux support on their hardware, they still (at least at the time of this video) do not offer a choice besides Windows when you order a machine from them. I mean look at Dell, they've been shipping machines with Ubuntu for years now.

As I had to get Windows and then later set up the machine my way, I opted for Windows 10 Home out of the two choices out there on the website, at least it saved me some money on a software that I was barely going to use.

The preinstalled Windows 10 Home on my ThinkPad

With all of that out of the way, let's talk about the pre-installed Windows that came with the hardware. Again, I've been using Windows at work daily since my first job in 2009, in fact on my personal computers since exactly 10 years before that in 1999, so I've seen almost everything Windows since version 3.1. But owning a Windows device after all these years made me look at it from a fresh perspective and appreciate how things just work out-of-the-box with almost zero effort.

So the setup on the ThinkPad contained almost no bloat. There were only those two to three software from Lenovo, Nvidia graphics drivers, a Lenovo wallpaper (which I won't be able to show in this video because I wiped their setup way back), and that was almost it. The rest of the Windows experience felt pretty stock.

Comments about the Windows setup

I've done this a few times before, even for a few friends of mine: buy a Windows machine and wipe it soon after the unboxing only to repartition the hard-drive and set it up according to my setup, but that way you don't get to experience the device the way it was supposed to be used. So this time, I took my time with the device still in its factory state before I could start my regular "onboarding" process. Not talking about my tight schedule when the device was delivered to me, I was scared to jump right into spending tens (or maybe even hundreds) of hours to get the machine run well with Linux, even though I had a guide with me this time. So the device was in an almost untouched state for a couple of days, and during the time, the way the device performed with Windows really impressed me.

The setup was perfect

So it's been years since I re-installed Windows on a device and I was expecting at least a few hurdles in the entire process. Surprisingly, everything from creating a bootable Windows installation media to the actual installation felt very effortless. I learned that these days, one can download Windows 10 from the official Microsoft website instead of those "Linux ISO" torrents and they even help you with the bootable media creation. Being from a different time, I noted the product key that the device came pre-activated with thinking that I'll need it after reinstalling Windows, but I didn't as it automatically applied the product key from my Windows account and activated Windows for me as soon as I logged in.

So does that change my opinion about Windows?

I'd say no. Back when I left Windows in 2013, it was just perfect for me, and all these improvements can still not lure me back in. I'm totally used to the freedom and those hundreds of choices that come with Linux and I'd probably never be able to go back to Windows again. I'm all up for having to fix my computer to make it work the way I need it to rather than living with the limitations of a system like Windows. It's great, but it's not for me.

But, as I mentioned before, I've dedicated a small partition on my drive for Windows and I might occasionally keep visiting there just to "update" Windows, only to return back to Arch on my "primary" partition for real productive work and play games, if at all. I didn't expect I'll ever be able to say what I just said: playing games on Linux!

So that's all that I had for this video, but the main part is yet to come in the next one, where I'll cover details on how I set up my workstation with Arch Linux. I promise, it'll be full of hopefully useful info and details about my struggle and eventually accomplishment (definitely no spoilers there). So till then, may the maker watch over you, see you in the next video!