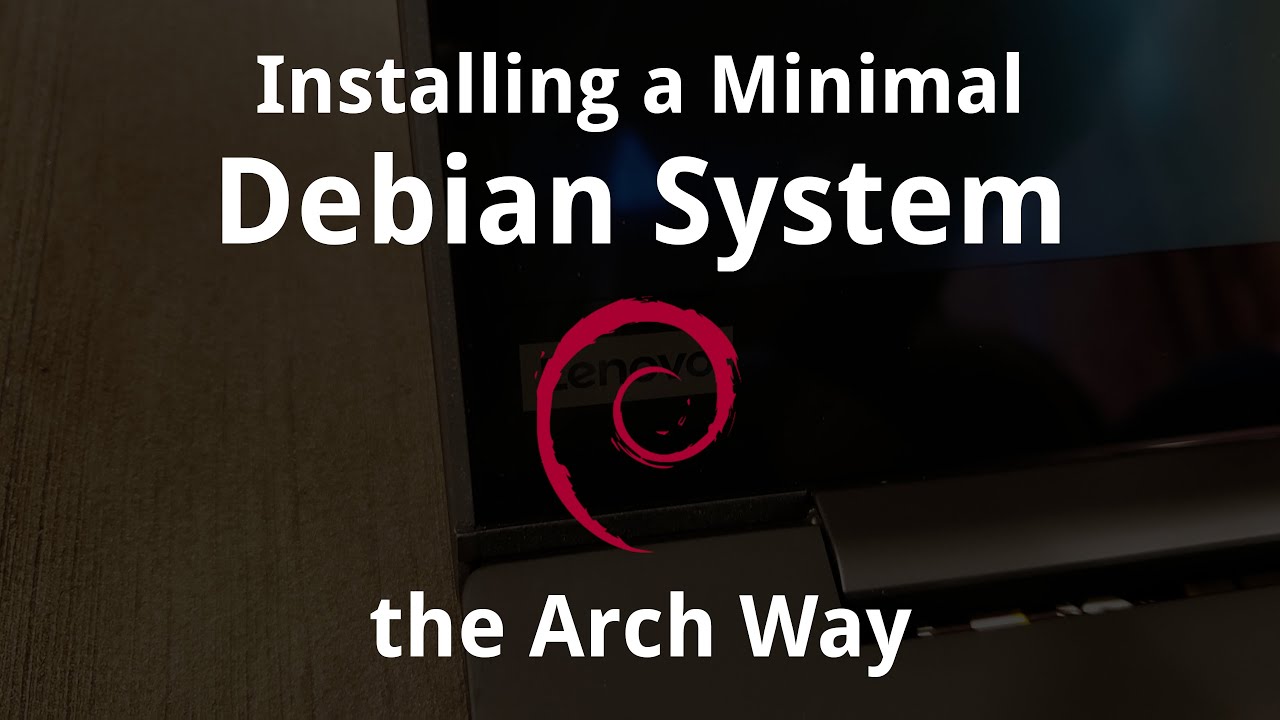 If you must have been watching a few of my previous videos, you definitely know about my recent move from Arch to Debian. I've already covered most of the aspects of the switch across a few videos, except the actual installation itself. In this video, we'll install a minimal Debian system almost the way I did on my primary machine.

I've already mentioned debootstrap a few times in my previous videos and I also talked about how it can be used to create a Debian installation on top of another Linux system which might not even be Debian. Though many of us won't find it that exciting because it involves tens of commands typed over the terminal, it's more of a blessing for the rest of us who like to have tighter control over their Linux right from the installation.

Why make a video about it?

One of the few reasons to make a video on this topic is that there aren't as many resources online about installing Debian over the command line as many as there are for other Linux distributions like Arch.

But then one would ask, why would you install Debian in such a difficult way when it already comes with a graphical and otherwise at least a text-based installer, effectively making all this effort useless. Why would someone be willing to go through all this pain of typing commands over a terminal and then eventually achieving a setup that is more or less the same? A short answer to this might as well be just because one can, but otherwise, I'd say that there could be very specific things one would want in their Linux setup that might not be possible through a graphical installer, a very good example is my own case.

With all that out of the way, let's talk about the things we need for the installation.

What we'll use for this video

To keep things simple (and quick), we'll install a very lean setup of Debian without a windowing system or any other software packages. We'll use virt-manager, which is a pretty cool alternative to Virtual Box for running virtual machines. We'll also have a very minimal filesystem table, just enough to have a running Debian system.

Booting into the Debian live ISO

Skipping all the regular and boring stuff, I'll quickly create a Virtual Machine in Virt-Manager, choose the Debian live ISO to boot into, select EFI as the boot firmware, and skip right to the point where the boot is complete.

The installation, as you might expect, may look very similar to an Arch installation. Along with a few other differences, there will be a few additional steps as well that are otherwise taken care of by Arch tools when you install Arch. So without wasting any more time talking, let's have some demo.

So once we boot into live Debian, we jump straight into a terminal and switch user to root.

Now that we're root, it'll be easier to continue with the installation.

Connecting to the network

A typical Linux installation starts with connecting to a network. However, as we're running a virtual machine, we don't need to worry about it, more specifically connecting to a wireless network, and we can just move along with the fact that our virtualization software takes care of it for us.

Before the installation, the obvious first step would be to prepare the filesystem according to our needs. Though my usual setup is not as simple, for the scope of this video, let's stick to a simple partition map containing a boot, a SWAP, and a single partition to hold Linux. Needless to say, you can obviously scale this up and add more entries in the filesystem, but all that is pretty common such that there are plenty of examples all over the internet and hence we won't do it for this exercise.

We can use cfdisk to perform the partitioning in a relatively effortless manner. We create a new GPT partition table and then:

Finally, we make sure we write the changes to the disk before proceeding.

Let us now format the partitions.

We start with formatting the EFI partition as FAT32.

Then we format the second one as Linux SWAP.

And then finally the last one as an EXT4. Again, I would've gone with BTRFS, but to limit the number of steps and also to keep things simple, let's choose EXT4 for this exercise.

One thing to note here is that my devices are named vda and yours could be either sda or nvme, depending on the type of hardware, so you'll have to make sure you change the commands you run accordingly. You can simply check what your drives look like using lsblk.

Once we have all that we need, we can start mounting the partitions appropriately.

Then we create a directory for /boot/efi.

And then mount the EFI partition.

And then we finally set SWAP.

This takes care of mounting all partitions and we are pretty ready for the installation.

Depending on what operating platform you're running the installation from, the way you obtain debootstrap may be different. As we're currently running Debian itself, it could be installed as apt install debootstrap.

We just have to make sure we have the latest package metadata first.

And then we can install debootstrap.

With all partitions mounted, and with debootstrap in hand, we can start the installation rightaway:

This command assumes that we're installing Debian 11 Bullseye on a 64-bit system, which should be OK for most of us, or at least for the sake of a demo like this. This step takes a while depending on several things like the computer, the network speed, etc. We can fast-forward to the completion of this step, after which we'll have a base system ready.

Before we root into the installed base system, we need to perform a few things:

We copy the /etc/mtab file from the host system to the new system.

And then we bind a few virtual file systems to avoid issues we might otherwise encounter during the installation.

These are a few things that are automatically taken care of while installing Arch with pacstrap and then rooting into the system using arch-chroot. Regardless, with all this taken care of, we should be good to proceed.

We can create the /etc/fstab file manually but that would be a little cumbersome and also error-prone. To save some time and also make sure we're not messing things up, let's do it in a smarter way. We can use genfstab to generate the file for us. As we're running Debian, we could install a package named arch-install-scripts through apt.

Once installed, we can run genfstab over /mnt to get an /etc/fstab file.

With this, we didn't have to type anything manually, and yet we have a proper fstab file.

Changing root to the new system

Now that we have everything ready inside our freshly installed base system, we can now safely root into it.

This command is pretty similar to how we usually root into an Arch system using arch-chroot. Once executed, the next commands we'll type will be run in the new system.

Let us start with updating /etc/apt/sources.list to include non-free software. This won't be needed for the software packages we'll be installing as a part of this exercise, and you can choose not to do it, but I'm doing it here just to show you that one can, just in case.

Let's use nano to open /etc/apt/sources.list:

You can obviously use any text editor to edit this file.

We just need to add a couple of keywords at the end of the line:

Then we run an update on package indexes (or indices, to be grammatically correct).

With the apt sources correctly set up, we can install the software we need, but our aim isn't to set up a daily driver, so let's just only install what we absolutely need for the rest of the installation.

I'm just including neofetch for us to be able to see a report after the installation is complete.

For setting up timezone, we can run dpkg-reconfigure.

You can choose a region you live in, or at least would like to in. I'm choosing Central US.

For setting up locales, we can run dkpg-reconfigure again.

I choose en_US.UTF-8, but you can choose whatever is applicable to you.

Next, we set up the hostname of the new machine. Let's call it "titan".

Then we configure our hosts file. Let's do this using vim. Again, you can do this with any other text-editor too, including nano, that we used in one of the previous steps.

After adding this additional entry, hit "Esc", then ":wq" and "Enter".

And we finally configure network interfaces

Let's just save the file, and done.

To set up users and groups, let's first start with setting up a password for root.

And then let's create a non-root user for the system. Let's name the user "Miranda".

So she has a home folder of her own, her full name is "Miranda Lawson", and her default shell is bash.

Finally, let's also add her to the sudo group so she can run sudo commands too.

Just as most of our setup was pretty simple, we don't need to do much for the bootloader either.

Choosing GRUB as the bootloader, all that we need to do is to run a grub-install.

And then we generate GRUB configs.

Ending with a cleanup

That takes care of everything and we can now safely leave the newly installed system.

We don't have to worry about the few errors that we see. Finally, let's reboot into the installed Debian system.

Logging into the new system

After the reboot, we have a minimal Debian system that we installed using debootstrap!

Let's run neofetch and see what it looks like.

Now that we have a minimal Debian system running, there are several possible next steps one could perform. One can install a windowing system, which can be Xorg, Wayland, etc. followed by a graphical environment, for which one can use twiner too. One can also install a few useful software packages that they would need for daily use. However, all that isn't the point of this video, so I'll leave all that to you.

And that's just a small example

All the steps we went through were pretty basic, partly to keep the video simple and short, and then also because I'm not a hundred percent conversant with debootstrap yet except for the few times I've used it till this point. I'm sure the tool allows a lot more, but I leave that as well for you to explore if at all you're interested.