Back to Linux - Ep 09: One Year with the ThinkPad 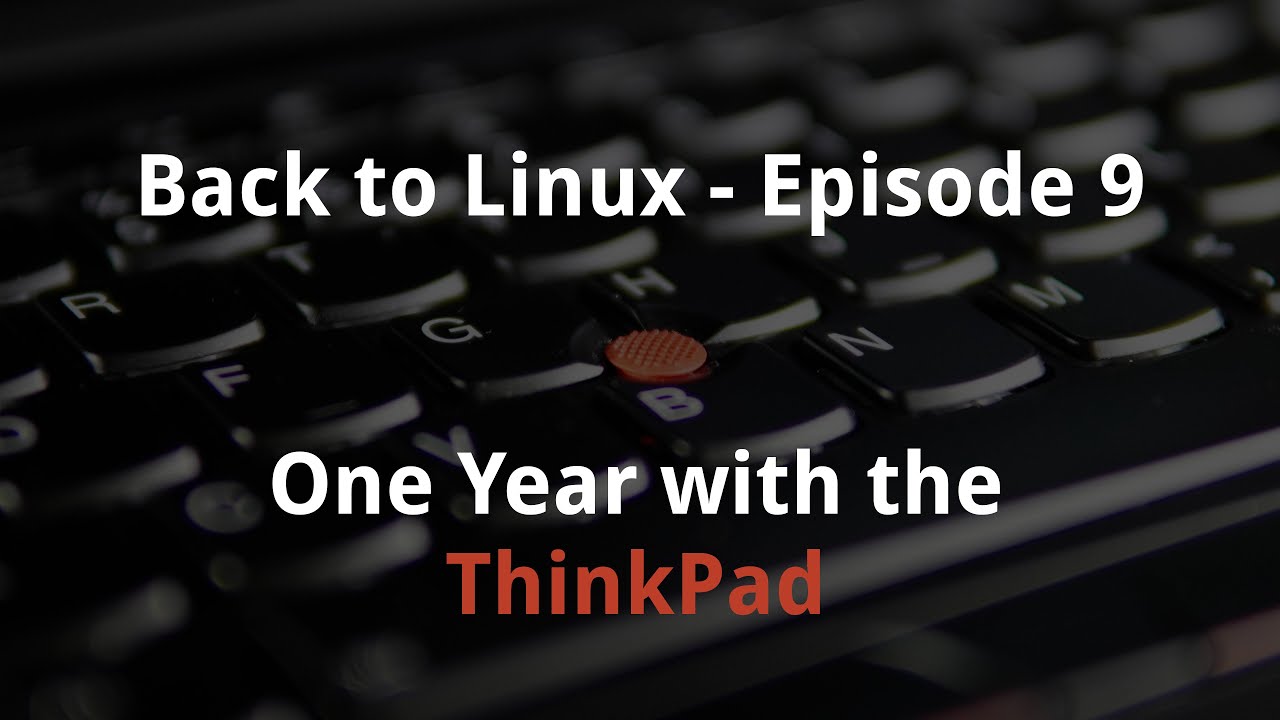 This video is a part of my series Back to Linux in which I've been covering my transition from my Apple MacBook Pro to a ThinkPad since almost a year now.

If you haven't watched the previous videos in the series yet, you might feel a little lost in this one. I would highly recommend watching at least a couple of previous videos to learn about the machine I'll be talking about in this video.

As we're almost reaching November 21st, which is the first anniversary of my ThinkPad, I thought I'd talk about my experience using (and configuring it) during the first year.

If I were to tell you my experience in as few words as possible, I would say that I'm glad I chose the ThinkPad X1 Extreme. Not only am I impressed by its computing power, but I also love its overall design and especially the awesome keyboard layout and feel.

Now, I'm not the best at making decisions, and that often also includes purchase decisions. Though a few of the purchases I have been making recently make me feel otherwise, this one, in particular, has been a little bittersweet at times. Yes, this computer is much more than what I could have asked for, needed for my daily tasks, and even deserve, and I'm grateful to God for it, but I'd still like to mention the following choices that I think have gone wrong with this purchase:

As it goes without saying, the most obvious one is the Nvidia GPU. I was never into using Linux with these high-performance GPUs and had often run whatever drivers the distro came with, which in most cases used to be low-performance drivers. Even though I now know how different nvidia and nouveau can be in terms of performance (if you ignore the bugs), running nvidia has been trouble, which is something I've covered a lot in my previous videos, and in case you missed it, you can find them in my videos I've linked in the description.

If I would have not opted for this "4K UHD (3840 x 2160) OLED touchscreen with anti-reflective, anti-smudge, Dolby Vision, etc.", I could have literally saved money for another laptop. I went a little overboard while configuring this system, and though it looks gorgeous, I still have scaling issues across applications in Linux. Windows seems to handle it well for some reason, which I guess will always be the case, but that's not what I bought this machine for.

This 4K screen also eats a lot of battery, which when coupled with the other power-hungry components inside, drags the battery level way faster than I'd prefer.

Though this device has a fingerprint sensor, I've hardly ever used it. On Windows, the Windows Hello used to perform great, but on Linux, neither do I have that, nor have I been able to utilize the fingerprint sensor. I know having it doesn't hurt, but I usually prefer to only pay for what I need or plan to use. This either gets me the stuff that I want at a lower price, or a better product for the same amount of money.

The other side of the wrong decision, especially the one involving Nvidia, has been a lot of learning. It pushed me to look for alternatives, without which I would have still been running Fedora. Not that it's a bad distro or anything, but because Nvidia gave me more things to worry about, I explored Arch, then Debian, and now I'm running Void. And this isn't just about these Linux distros, I also learned a lot more about Linux than I could have ever imagined. Frankly speaking, I wouldn't trade all this learning for anything, so I'm glad I made this mistake of buying an Nvidia laptop to run Linux. Having said that, now that I have learned all this, and have also seen how things work, I'll probably choose other areas of learning to spend my time on for my next purchase, if you know what I mean.

As I've mentioned in my last video, I now have a software setup that's better than anything I've ever had. This not only includes the Linux distro that I'm running, but also my dotfiles, which keeps getting better as we speak.

My plan is to keep improving it (while also using it to get some work done, of course), and share my learning on this channel in form of future videos. If you have anything particular in mind that you think I can create a video on, please let me know in the comments.