Celebrating N7 Day 2021 (and My Ten Years with Mass Effect) 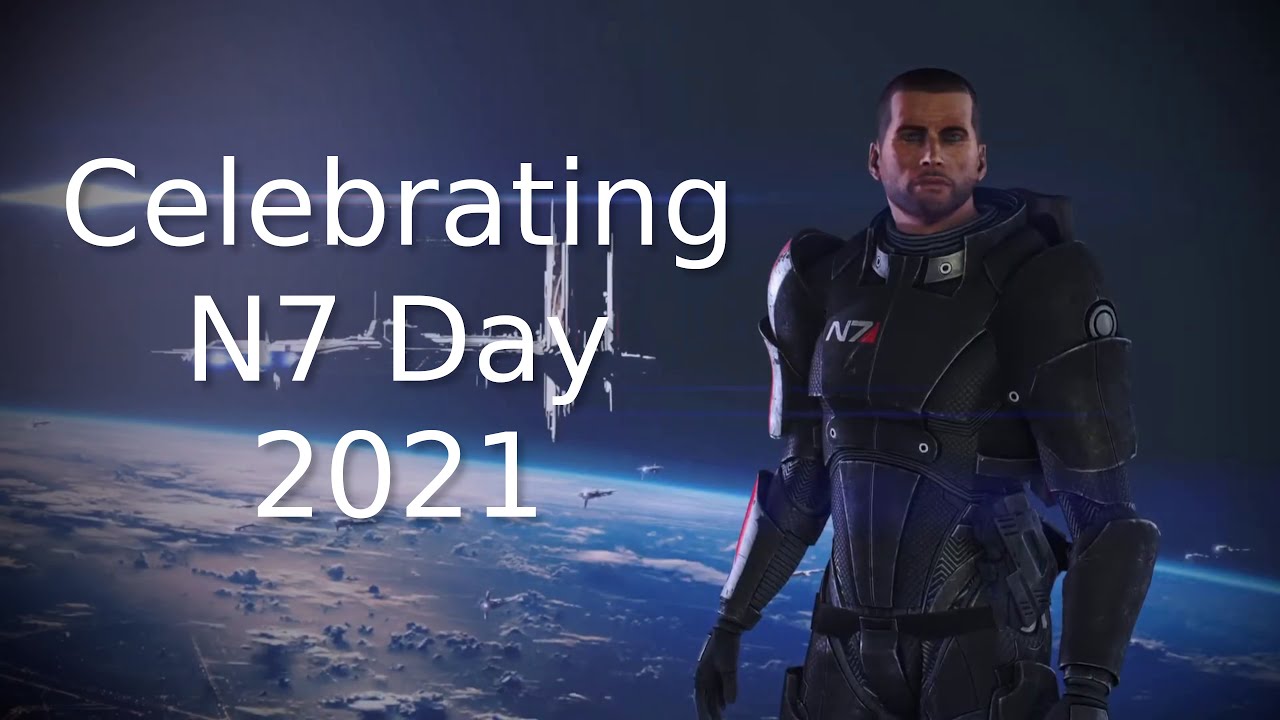 I'm a huge Mass Effect fan and if you have ever interacted with me, you definitely wouldn't have missed that. November 7th, 2021 marks my tenth N7 day, which is the reason I thought I'd make a video talking about my last tens years with Mass Effect and much more.

What is Mass Effect?

If you've never heard of Mass Effect, let alone play it, I won't try to introduce it to you in this video, otherwise, it would be several days long. Instead, I'd just mention that it's a science fiction media franchise that depicts an alternate universe where humans and several alien civilizations have colonized the Milky Way galaxy. It's pretty much the same description you'll find on Wikipedia, but yes, it's not just a video-game series, as there are comics, movies, and whatnot based on this universe. Feel free to explore for yourself and I'm sure you'll find it easy to lose yourself in it.

How I got "Indoctrinated"

I started with a copy of Mass Effect 2 bundled with Mirror's Edge that I found on sale in the latter half of 2011 at a store back in India. I wasn't there to buy a video game, and though I did, it was due to a suggestion from my brother for Mirror's Edge, it was for only INR 299 and I was getting an extra game that I had read about somewhere that it was somewhat similar to Crysis. When I tried both the games, I got hooked to Mass Effect 2, especially after the first mission when I found my character in charge of a ship where I could interact with so many other characters, and I was assigned a task to gather several crew-mates from across the galaxy for a suicide mission. Man, I also had a Yeoman and a personal pilot! Funny enough, I never touched Mirror's Edge again, and focused on completing Mass Effect 2's story, which I did in around 36 hours, reading all I could about the characters for their background from the first game because at times I had no idea why Shepard, my playable character talked to them as she knew them already.

Stepping into the Series

While playing Mass Effect 2, I was hearing and reading about the third sequel to the series and I also learned that one could import saved game files from the previous games to carry forward the choices that you made in the universe so that the game will effectively let you continue your personal story instead of having you play a predefined setting. I picked up Mass Effect 1 online, completed it in around 34 hours, imported the saved games into the second game, replayed it entirely (with my choices this time), and waited for the third game, hoping to be able to import my choices into it again.

I had never waited for a video game with as much impatience as I did with Mass Effect 3. Watching the same trailers, game-play sequences, and news from BioWare over and over again, reading everything possible about the launch of the game, writing graffiti on my desk at work with random Mass Effect dialogues, and whatnot. I'm sure people around me must have thought of me as crazy and technically I was.

Mass Effect 3 became the most expensive game I ever bought till that time when I pre-ordered it for INR 1,299. I was so much into it that I completed it within 13 days, which included my weekly commute to another city for work from my hometown, so that was something! It might also be my fastest completed video-game campaign ever, which in this case was around 33 hours.

I did end up reading a spoiler about the ending way before I finished the game as during those two weeks that I was playing it, Mass Effect was all that I could think about. I took every opportunity to browse forums to read about it, and when I stepped into a post I wasn't supposed to, it was a big mental hit, to say the least. Regardless, I completed the game and experienced the ending myself, and I still remember that night where I stared at the screen as the credits rolled while almost screaming inside, not able to sleep the entire night as my roommate was fast asleep in the next room, unaware of how mentally disturbed I was.

My Time in the ME Universe

According to my estimate, I might have spent over 263 hours in the Mass Effect universe, which includes playing the entire trilogy twice, once as Female and once as Male, and also that one time when I just played the second game as an introduction to the series. With this, Mass Effect also become the video-game universe I spent the most hours in. The close second is Dragon Age: Origins with around 65 hours in a single play-through for a single game, but that's not even close. I don't mind re-doing Dragon Age: Origins with all the DLCs if life would permit, and yes if EA Origin would work on Linux!

Mass Effect in My Daily Life

Apart from the physical discs and the digital licenses I own (yes I do have multiple licenses for the games), below are the few traces of Mass Effect in my daily life that the people around me have to go through pretty much every day:

Nothing Comes Even Close

Now I know it doesn't make sense to spend so much of one's time with a video game series and live in that universe every single day, but even after these 10 years, no piece of fictional art has even come close to what Mass Effect means to me. Yes, there is Star Wars, (and I know I might receive a lot of fire for saying this), but to me, Mass Effect is just the next level.

My Mass Effect licenses remained on the PC platform, which was pretty much limited to Windows. After I switched to Linux, the only way for me to re-play the trilogy would have been to have a dual-boot setup and that would've been even more difficult on my MacBook Pro, which is what I used for good four years. The Mass Effect trilogy was also later released on PS3, but that wasn't an option for me either as PS4 wasn't backward compatible with PS3 titles so I wished BioWare came up with a remastered trilogy, which is exactly what happened in 2021. Like millions of fans across the globe, this was a dream come true for me, as now I could play the entire trilogy, remastered for the current generation with many improvements, with all the DLCs, and that meant more than we I have asked for. After months of systematically convincing my wife why I need to buy Mass Effect the third time even after having completed the trilogy more than once, I finally acquired a copy for my PS4, which might be one of my happiest days in 2021.

My Wish and Plans

So it's been several years since my last two play-throughs and things have changed, there are more things to spend time on now, but I still wish to be able to play the trilogy one more (and probably the last) time, relive those memories, and probably also have a few super-emotional moments just like the old times.

I know it's way harder than it seems, given how many titles I've left in between, which includes my multiple attempts at very good titles like Horizon: Zero Dawn, Fallout 4, Red Dead Redemption 2, and many more. Maybe I would take over a year to complete the trilogy again, if, at all I could, only the time will tell.

I know this video is way different than my other videos, but as I always say: